You are here: Home / Board of Directors / Frank Mercado 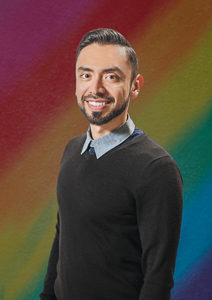 In 2015, Frank Mercado took a risk: he left his hometown of Pomona, California to become a partner at the downtown Campbell Allstate Insurance Office. “I knew nothing about the area,” he said. “I chose it from an internet business ad.” “I immediately fell in love with Campbell,” Frank says. Soon he also found the Rainbow Chamber of Commerce. “I met Ron Gardner of Gridley Company at a mixer, and later he took me out for lunch to talk about the Chamber.” It was the first of repeated invitations. “It felt great to be welcomed,” he says.

Frank joined for the networking and the friendships, and is now on our Ambassador’s team, welcoming others to the group. In December 2015, Frank bought out his partner and made the Campbell office his own. “I’ve had a great year, and it’s all gone smoothly,” he says. His office made Silicon Valley Journal list of top 20 LGBT firms in 2016, and are in line for several awards with Allstate. “I’m not competitive,” Frank says, “but the insurance business comes naturally to me.”

Frank loves reading, drawing, hiking and quiet evenings at home, weekend getaways and traveling. He’s learning to cook – using YOUTUBE videos and Skyping his mom for guidance. He hopes to adopt a child in the next few years.